I was recently invited to a potluck brunch, and as a person who doesn’t typically eat breakfast (coffee is my breakfast most days) I was a bit stuck. While I love traditional Middle Eastern breakfasts – like ful medames, or a plate of fresh vegetables, bread, and labneh, or a big skillet of shakshouka, I have never really been partial to traditional western breakfast foods, particularly the sweet stuff. Hesitant to bring a bowl of ful with me (and having to explain what it was), I settled on quiche.

Eyeing my fruit bowl, I noticed a lingering gigantic tub of cherry tomatoes I’d bought at Costco and settled on making some roasted tomatoes. Roasted tomatoes are perfect for quiche, because they have a lot of flavour, and because the moisture has been removed from them – so they won’t make the filling a watery mess. If you don’t have the time to roast a tray of cherry tomatoes for two hours, you can also use a jar of sun dried tomatoes – they have a similar (though not identical) flavour profile.

Also, don’t be like me – I neglected to pre-bake my pie crust as I was in a bit of a rush and so the crust (while lovely and flaky) wasn’t as golden brown as I’d have liked. You’ll definitely want to pre-bake your pie crust until lightly golden (around 8 minutes) before filling. I used a rectangular tart tin, but you can use a round one and it will work just as well – it may just need a couple of extra minutes to set in the center. The removable bottom is key, though – so I’d highly recommend purchasing one if you don’t already own one. If you don’t own pie weights you can simply place some parchment in the tart tin with your crust and fill with dried beans or lentils, or rice. You can still cook and eat said beans / rice after – so it’s not a waste.

Za’atar is an essential Levantine breakfast herb blend, so I added it liberally to the quiche filling and the combination of the earthy za’atar and the bright, intense roasted tomatoes is a perfect combination. My egg-hating husband even compared the quiche favourably to pizza. The ratio of eggs to dairy (1 egg per 1/2 cup of dairy) means a creamy custard inside without a strong egg flavour, so even those who aren’t crazy about eggs will like this quiche. I’ve included instructions for all aspects of the quiche below, including the delightful roasted tomatoes – which are also amazing on pasta (add a little pesto and a handful of these to some good pasta and you have a delicious meal). 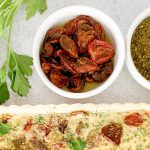 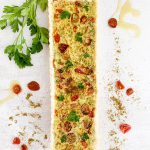